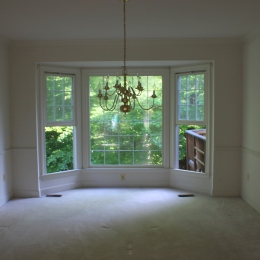 The Dining Room was a blank canvas when we moved in. As with other rooms we immediately removed the dark blinds that blocked all the wonderful light.  Actually Melanie was visiting and she removed them – thanks Melanie!

We removed the carpet prior to moving in and had hardwood floors installed throughout the first floor (minus the kitchen).

The floors are just a standard Bruce Gunstock Oak.

The walls needed some help, so that was a few fun days of mudding, sanding and repeating it over again.At last I was ready to start cutting in the paint. 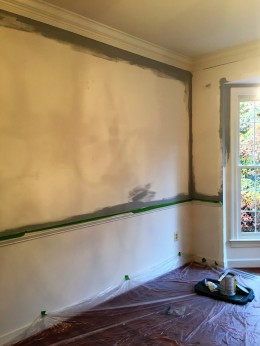 The color for the walls is:

Let me just say I love the edgecomb color. Painted the living room ceiling with it for continuity and am considering painting the basement in edgecomb. I chalk-painted the chairs in a prior post, Chalk Paint Chair Makeover. You may notice that the two end chairs match the ones in the breakfast room. Breakfast Nook – Before and After  I can put a leaf in the round breakfast room table and add these two chairs to that table whenever I need to do so. The table leaf was painted at the same time as the chairs. The leaf was one my husband had hand-made for me. It fits perfectly – good job honey – but never matched the table even when stained, so was not too risky to try it out.Figured I would sand and restain the whole thing, table, leaf and other chairs, in a rich java color if it did not turn out. That would be a LOT of work so will be happy for now.

Would really like to replace the chandelier,  but it is currently just spray painted with white paint that shows some of the metal through it. Added fabric to the chain and added crystal branches at Christmas. I like them and will leave them up until the chandelier is replace. However, DO NOT do what I did. I painted the chandelier in place with spray paint and did not properly cover furniture. What was I thinking? Luckily I was able to clean off the wood furniture before the spots dried, but it took a LOT more time to do this simple project as a result.

The sitting area in front of window deliberately echoes the same set up in the living room as you will see in my next post. This picture was taken in late fall as you can see by the remaining fall colors outside. 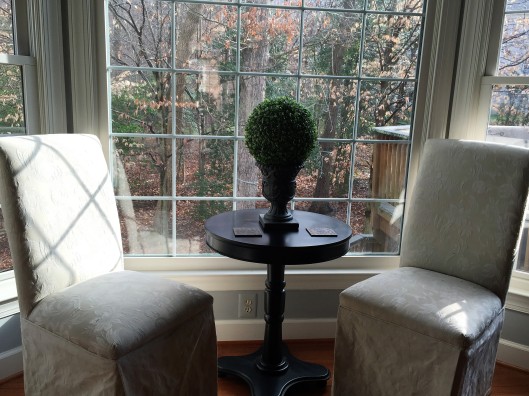 I tried it with the table going the length of the room, but I did not like it quite as much. You can see it below with the greenery still up from Christmas. The pictures don’t really explain why and I am not sure I can either. I rearrange periodically so may have a post in a year explaining how much better it is to have the table running the other way from how I have it now. Then again, I even had the table running diagonally for a while so who knows. Probably should just get a round one and be done with it.

And there it is with the wall pictures. The pictures are from Ballard Designs. L-O-V-E them. Not sure why I have the fairy lights near the candles, but oh well.  I wish I had purchased them in the larger size. But I already had the one so bought the second one in the same size. I wish there was a third version, I would respace these with three on the wall. Have experimented with medallions and sconces, but so far have not found anything I like to go with them and fill the wall up more. The samovars on either end of the table above are sometimes there and sometimes are not. Just don’t have a good place for them.

The one with blue birds was in my kitchen in the last house. Was thrilled to find a match in the same size for this house. The china cabinet will move down a good foot and a half more and there will be more space for that end chair on the right. Just waiting for a flat plug to arrive in mail before I move it down and plug it in. The room will not look as crowded once that is done.It probably looks like less room in picture below, but it really is a good foot and a half, trust me.

In the picture below you can hopefully see that there is actually a good bit of space behind the table. I think you have to be in the room to appreciate it though.

The centerpiece is a mirror that fell off the wall and can no longer be hung (at least not without some work).

And there you have it. Cracked walls repaired and painted, new floors and furniture – too easy!