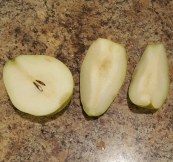 I made a pie, just to take pictures of the process, of course. After cutting the excess crust from around the sides of the pie pan I thought about my grandmother and her generation and how they did not waste anything. Thoughts ran through my head about what to do with it. Sitting on the counter sat the last pear out of a group I had purchased just days earlier. A pear tart, who ever thought of a pear tart. Well, apparently a lot of people have. A quick google search revealed many a recipe, most too complicated and involved for me to replicate at that moment. Oh well, I’m going to do it and I’m going to do this as quickly and easily as possible, I thought.  And so I did. 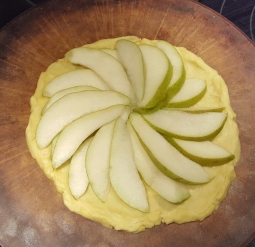 I rolled the rest of the dough into a circle. I sliced and cored the pear and set it in a ring on the dough. I sprinkled it with sugar and cinnamon, and folded the edges around. I placed it in the oven with the pie on 425 degrees for 15-20 minutes. Took it out, drizzled honey over top and voila, quickest and easiest dessert ever, not to mention, it was delish.